as the time is rapidly approaching I thought I'd get the Conwy thread up and running. News so far is - there's no news. A while to go before they start entering the Conwy again, June at the earliest but picking up better in July. Soon be here!
A

Good to see you set up the thread.....any lovely trout pics to keep us entertained in the meantime?

No not much at the moment. Haven't blown the dust off the rods yet. First trip out 1st of May so perhaps soon.
B

Not sure i can resist any longer....

Some fish about! Myself and Sam had a couple of hours on Wednesday night. One fish on briefly and another one or two seen. Another night out last night. Fished from dark until first light. River was still ow but had come up a couple of inches after yesterday's rain. Hooked and lost another two fish, one small one that went aerial and another better fish that stayed down. Saw 6 or 7 show in the deeper pools but I think the lack of water might be making them reluctant to try and move up.

Hopefully one will stick soon!

Another trip out last night with. Conditions were good but river still very low. We saw a couple sneak into the pool as it was getting dark so knew there were one or two pushing through. First run down the pool for me and not a touch. Low flow was making life difficult with flies hardly moving. So had a go down the run that leads out of the pool and managed a good strong take about the 4th or 5th cast. Some determined runs ensued but the fish stayed down ...suspicious. Sure enough once it came to the net the reasons for its dogged deeper fight became evident - a salmon around the 7lb mark. Been in for a bit, but a good, even if slightly unconventional way to get off the mark on the Conwy. Ironically my first fish at night on the Clwyd last season was also a salmon.

Sam decided to fish on when the lure of a warm bed and the nag of work in the morning were enough to convince me to head off home. His persistence was rightly rewarded half an hour later with a lovely bright 3lb fish, also returned. 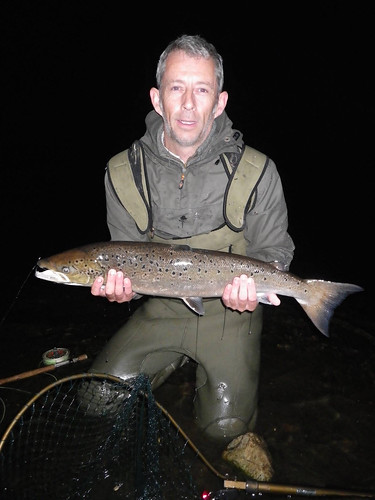 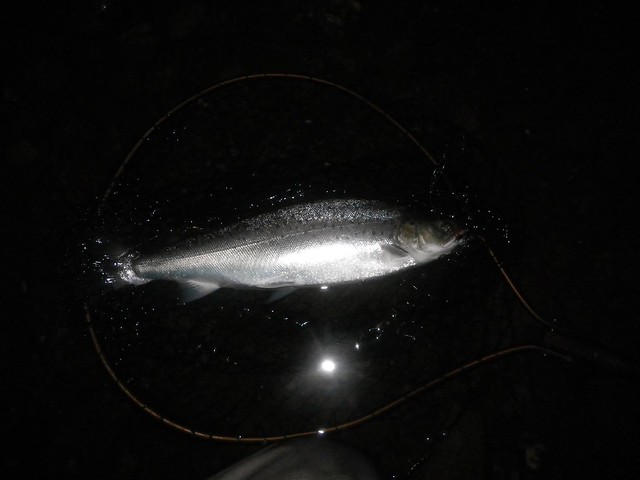 well done Stuart, off the mark

Well done boys, tho that salmon does look like a back end fish. Wonder when it came into the system to be so coloured.

Cheers chaps. Difficult to say how long it's been in Paul, a couple of weeks at least. Would have been a fine, if slightly small springer at one time.
A

Lovely to see some fish being caught somewhere! Well done guys!
A

Well done both, good to see the springer....never had a salmon at night, spanking seatrout....
B

Fished the fly on dropping water on Tuesday morning and landed a nice fish around 2.75lb, saw several others move. Get the feeling we could be on for a good year on the Conwy if water levels are kind.

Good night to be out on the Conwy last night, and there were only two of us! Sam had an excellent night higher up. Hopefully he'll put the details up later, and I managed to snag a few and lose as many further down too. Best of the night for me was a mint 5lb fish - returned. 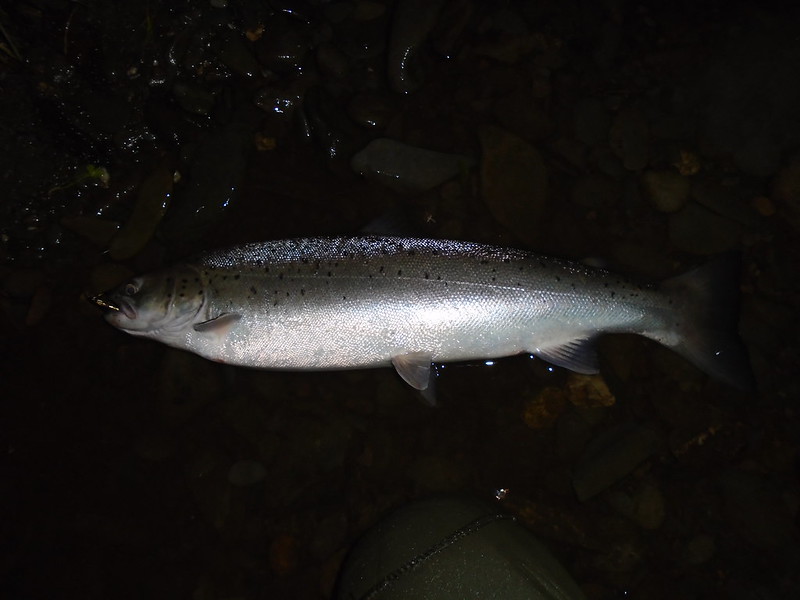 Yes good night on the river last night, had 2 smaller fish and a real nice lump which weighed in at 9lb 4oz...all fish safely returned back to the river, plenty of fish about as I lost another hefty fish and had plenty of good pulls....shame the river has come up today otherwise I reckon we could have been in for a good weekend.

That's a real clonker, nice one. I can't sleep was supposed to be night fishing tonight until the weather gods intervened....more than a little cheesed off, Saturday looks no better either.
B

The 'jumpers' are in....lots of small fish have come on the flood water yesterday and today....fished the fly this afternoon /evening and had 6 sea trout. 5 of them were around the 1lb mark and really bright fresh fish, did get a bigger fish of about 3.5lb also looked like it had come in on the tide. Wish the river would drop down and settle for a couple of weeks, don't feel right getting a good nights sleep this time of year!!

Well done Sam. Agree about the levels, it's out of action more than it's fishable at night the last couple of weeks. Really hacking me off now!
S

Any updates for the Conwy will be making a trip over in a couple of weeks.

There's fish about Sewinstar but it's not taking much rain to keep putting lifts on it. Had a couple of hours out tonight, levels just fining down to nice height but way too much peat in the water. Clarity around 1 foot, which is pretty bad. Usually needs a few days to clear out but should be good by midweek. Fished the Clwyd on the way home for a couple of hours, not a fish seen. Can't believe how different that river is compared to last year. Irrespective of what's gone before as far as levels are concerned, last week in July would expect fish still to be entering the system but there's no sign of a fish.
You must log in or register to reply here.
Share:
Facebook Twitter Reddit Pinterest Tumblr WhatsApp Email Link
Top